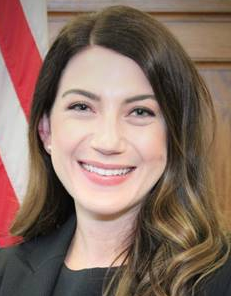 Sarah Greenwalt McMurray made headlines around the country as an aide to Trump's embattled EPA chief, Scott Pruitt, in 2018. She'll be replaced at the commission by Lauren Hammonds Johnson, who has been an assistant attorney general for Oklahoma, according to a local news report.

McMurray was one of several officials who resigned from the EPA last year amid controversy over Pruitt's spending habits. She previously was general counsel to Pruitt when he was Oklahoma attorney general, then followed him to Washington.

McMurray herself was the subject of scrutiny after she received an unusually large pay raise at the EPA, then wrote a memo that appeared to be aimed at absolving Pruitt of blame in the matter, according to news reports. Pruitt left the agency later in 2018.

McMurray's replacement, Johnson, started at the Workers' Compensation Commission last week. She has spent the past six years as assistant attorney general for Oklahoma, where she led criminal prosecutions, wrote opinions and oversaw an open records and open meetings education initiative.

She earned her bachelor's degree in accounting from Oklahoma State University and her law degree from the University of Oklahoma.

FL - 10 Indicted in Alleged Plan to Use Rural Hospitals to Bilk Insurers Out of $1.4 Billion
By William Rabb (Reporter)
600 views